For the Crockfit weekend (yes I know it was back in January I went, but I’ve been busy and I promise this post was well worth the wait) we were catered for by the amazingly talented Ceri Jones of Natural Kitchen Adventures – not only were the meals tasty and delicious, they were wholesome and healthy with the right balance of our macronutrients (carbs, fats and protein) and supplying plenty of micronutrients (vitamins and minerals) too.

Along with that, it has made me try new things – such as celeriac, which was yummy as a mash and also in the remoulade. It also reintroduced me to vegetables that I tried as a child but didn’t like such as beetroot (the issue there was the colour it turned my pee – and when you’re only about 6 years old, bright red pee is frankly quite terrifying!!!)

On top of this, it inspired me to have a go at cooking once I was back at home – which I am sure my Hubby was very happy to hear as he cooks the majority of our main meals, but Ceri made everything look so simple and enjoyable that I really wanted to try, which is why I purchased a celeriac and some Braeburn apples on my return.

So I’ll take you through day by day and discuss each of the meals (I got photos of most of them – though I think there was one where I was so hungry I forgot the piccie and just ate the food!)

WARNING: Have food with you – this post will make you feel hungry!!!

Starter: Beetroot and Pink Grapefruit Carpaccio (this was a take on a meat or fish carpaccio where the meat or fish is served raw and thinly sliced – in this instance, the beetroot was sliced exceptionally thin)

I was a little nervous at first because, as I said above, I didn’t really eat or particularly like beetroot or so I thought, but this delightful starter changed all of that. The sweet earthiness of the beetroot contrasting with the sharpness of the pink grapefruit was delicious. 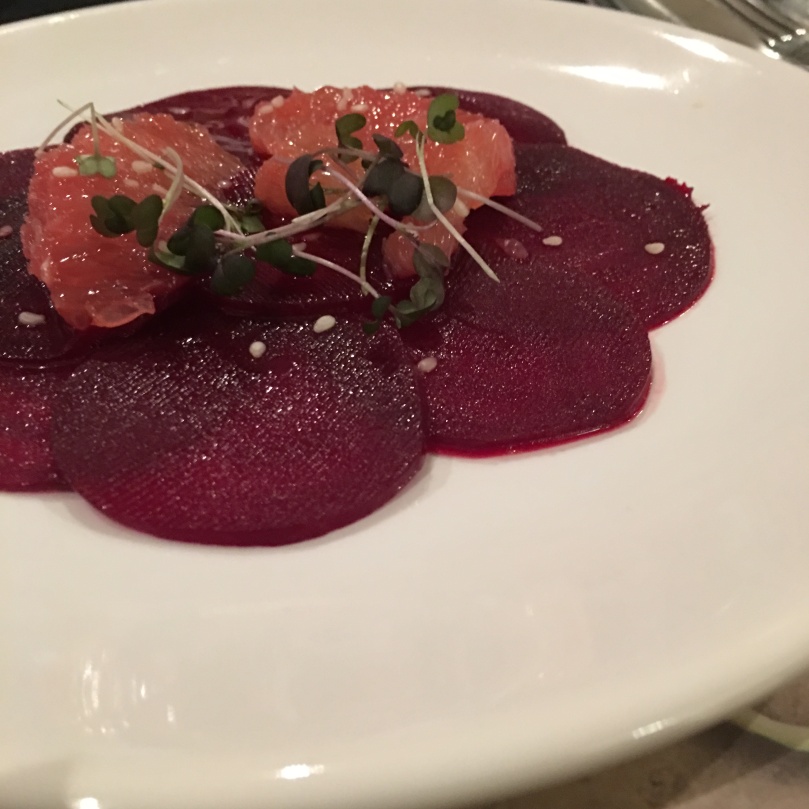 This was so unbelievably tasty – the sauce/gravy on the mushrooms had loads of flavour and for a vegetarian meal was really meaty. This was my first time trying celeriac and it was delightful, I really liked it.

I have numerous intolerances when it comes to food, and there’s nothing like going away to really highlight the fact! So bless Ceri, she did me a separate brownie as there was part of it that couldn’t be made without coconut, which is one of my many triggers. So I was just about to have a big mouthful when Ceri described what was in the brownie for me to realise I couldn’t eat it because it contained walnut! I did feel slightly embarrassed that I had forgotten to note that one… I do believe it was as delicious as it looked because everyone else devoured theirs (including my slice!)

The Bircher was like a super awesome overnight oats and was served cold with hot compote, and I added some cacao nibs, and it was delectable. My mouth is actually watering as I write this and remember it. I also had some gluten-free toast with crunchy peanut butter. It was a superb way to start the day!

Yet again poor Ceri had to do a separate version for me as I couldn’t have the Rose Harissa Dressing as the Harissa contains chilies – which is something else I just cannot cope with, but this didn’t take away from what was a truly tasty dish. I can eat Buckwheat – despite its name, it’s not actually related to wheat so it’s totally fine for me and super tasty and wholesome. Such a yummy meal – totally loved the baked feta with the roasted tomatoes on top too, it was so creamy and flavoursome.

Starter: Celeriac and Apple Remoulade with Hazelnut and Cress

This was a personal favourite of mine – I could have eaten so much of it! The celeriac and apple was so crisp and fresh, with the tartness of the Greek yoghurt/mayo mix and the added crunch of the hazelnuts was terrific.

I loved it so much that when I came back home I made it myself (causing myself multiple minor injuries on my hand with a julienne peeler to then twig when I was finished my food processor has a julienne blade… *sigh*) The outcome of my homemade remoulade was yummy, though I did add a little too much Greek yoghurt/mayo mixture. I really loved the taste of the hazelnuts when they’d been toasted in a dry frying pan – it just added something that I can’t quite describe, but really works. Plus I couldn’t get any radicchio lettuce, but romaine worked just as well.

I was a little nervous about this as I don’t usually eat salmon, but this was really delightful and filling. A great and tasty way to get some of your protein intake and an amazing source of Omega-3 Fatty Acids! 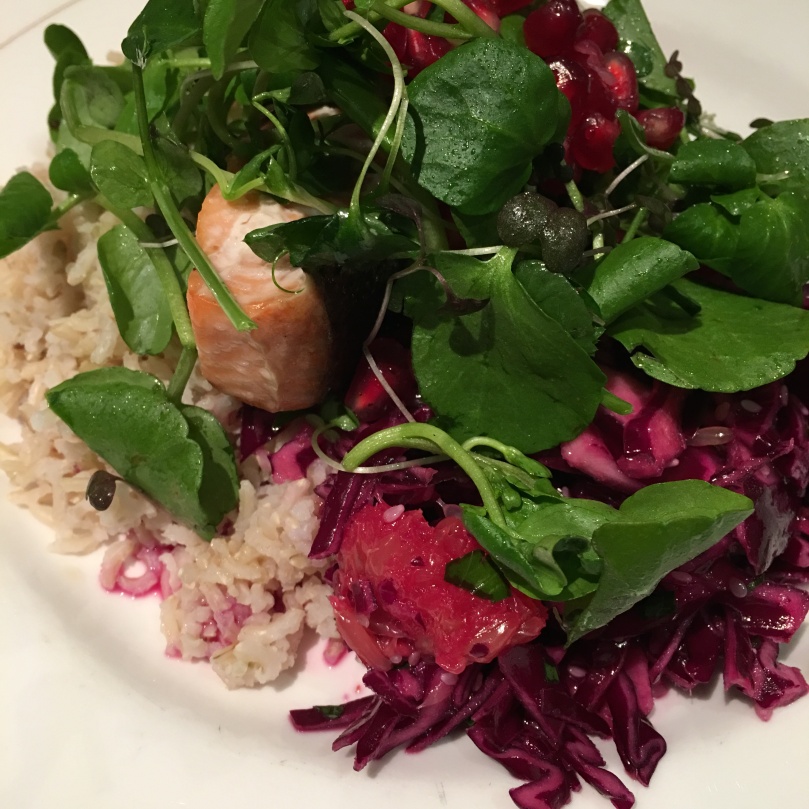 This was to die for. This is what you call a balanced diet, and a little of what you fancy is good for you! Absolutely delectable – and the creme fraiche and rhubarb gave a freshness and lightness to the rich almond cake. If you hadn’t gathered I really loved this – but it was chocolate so what’s not to love!? Haha!

This breakfast was well and truly earned, as we had all taken on an intense HIIT workout with Alex prior to breakfast, outside, in the cold and it had snowed! It was so cold my phone actually switched itself off where I had it filming! So this breakfast was very much needed and I think extremely appreciated by one and all! This was so good – I didn’t get a photo of it until it was all gone! Whoops!!!

This meal had a little audience participation! We were taught to massage the kale – again, I was so inspired I did this again once I was home. This was the first time I tried Carvolo Nero (just love the name of this veg, sounds like a cool character name from Hogwarts!) also known as Black Kale – and it was really lovely, less bitter than curly kale. By massaging the kale with oil, lemon and a little salt it sort of ‘cooks’ the kale breaking it down.

I also learned a new method for getting pomegranate seeds out of the fruit.

I have to say those little red jewels made the kale pop – finding these little bursts of flavour is just amazing and made every mouthful an adventure. With the homemade hummus (I have subsequently tried to recreate this at home – but it was a failure, tasted really grim, not sure what I did wrong!?) and the truly hearty beetroot and lentil salad it was the perfect last meal.